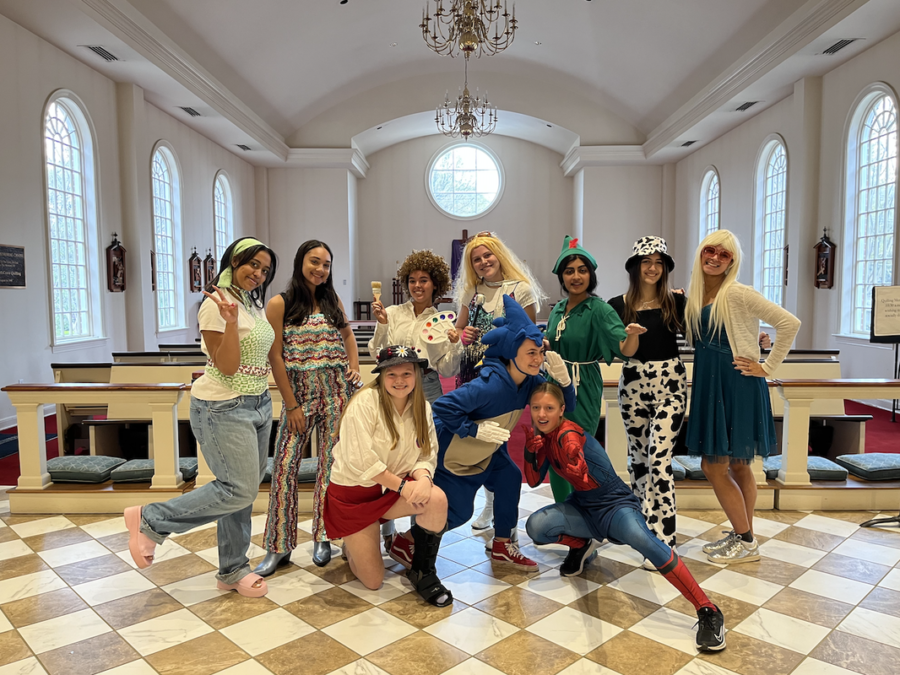 Learn about St. Mary’s Stuco candidates and the winners

The idea for this article came from our best friend Amsey Liebenow, who wrote about campaign week in 2021. We feel honored to remember her through this story coverage and are continuously inspired by her previous dedication to Tatler. Thank you, Amsey, for allowing us to follow in your footsteps.

Student Council campaign week at St. Mary’s is nothing short of amazing. Whether it’s the incredible themes and costumes or the delicious foods, SMS students love to hear from classmates about their ideas for how to make the school an exciting place the following year.

Below, we present to you the 2022 Stuco candidates.

Theme: “Anna Montana”
Her theme was based on the popularity of and her love for Hannah Montana. Reflecting on her reasoning for running,
Reason for running: “I really liked being involved in [student government]. I just want to [be involved].”
Fun fact: Piper got rabies in the 4th grade after being bitten by a rabid bat!

Theme: “Bob Ross”
Ross said, “I really love Bob Ross, and I think he’s a great idol. He is so happy and fun.”
Reason for running: It was a sophomore in Ross’s French class who told her to consider running, and she ended up turning in the ballot 10 minutes before it closed.
Fun fact: Ross is an only child who loves adopting her friend’s siblings.

Pep Club President:
(This year, Stuco has evolved to whoever does not get voted president is the Vice President.)

Theme: “Peter Panjwani”
She said, “I thought of this theme on the spot in my third period creative writing class.”
Reason for running: Panjwani said, “Pep Club would be the next best thing to do in my Stuco career.”
Fun fact: Panjwani does NOT have a twin, despite popular beliefs.

Theme: “Sonic the Hedgehog”
Her theme was based on her long standing nickname “Hayden the Hedgehog.”
Reason for running: Hedges said, “I have been told I am a natural leader through lacrosse, and although my athletic abilities have never been the best of the best, I have always been the top person when it comes to encouraging my peers. I also have a lot of self-confidence, and I knew I could get out of my comfort zone super easily and talk in front of everyone.”
Fun fact: In the fifth grade, Hedges attempted to whip in her room, and her foot was impaled by her fish’s “Spongebob Squarepants” adobe house!

Theme: “Camilk”
Smith came up with her theme because of her long-time love of cows and milk, despite being made fun of for it.
Reason for running: Smith said, “I love social media, and communications is definitely something I would consider doing in my future. I really want to represent the St. Mary’s community and all of the extracurriculars and clubs.”
Favorite part of the week: Handing out chocolate milk to everyone. She said, “It is the best dish in the world.”
Fun fact: Smith loves Keanu Reeves so much that her friend gave her a sequin pillow with his face on it.

Theme: “Spider-Van Hoozer”
Originally, her theme was going to be “Super-Van,” but Van Hoozer found “Spider-Man” a more fitting figure for her campaign.
Reason for running: Van Hoozer said, “Caroline Griffin, [this year’s Communications officer and friend of Van Hoozer], would tell me about the position and being in leadership this year, and it really made me realize that I have to be a part of something within the St. Mary’s community having to do with leadership, and Stuco was the perfect opportunity.”
Fun fact: Van Hoozer and her dad have an instagram account dedicated to their cat (@fatboyskit).

Theme: “Mamma Mila”
The idea for this theme came from Soraya Nazor (10) on the bus ride to the YIG.
Reason for running: Szatkowski said, “I’ve run for class president twice and haven’t won.” Additionally, she has a passion for planning events.
Favorite part of the week: The food booths.
Fun fact: Szatkowski has never liked chocolate.

Theme: “Zoe 101”
This was a play on Nickelodeon’s 2005 hit show “Zoey 101.” When choosing her theme, McMullen wanted to time travel back to 2010.
Reason for running: She said, “I really like holding student government positions, and I feel that if I was in the room where it happens, I could make spirit day outfit choices better and do a lot more fun activities involving food for the school with blue and white!”
Fun fact: McMullen has a TikTok that has reached 6.2 million views.

Theme: “Mary Elizabeth Poppins”
She decided on this theme with the help of her campaign manager Cam Lawrence (11) because the SMS theater department just put on this production, and she said, “it is fresh on everyone’s minds.”
Reason for running: Dyer has always thought it would be fun to be a part of campaign week and Stuco.
Favorite part of the week: The food booths.
Fun fact: Dyer’s two dogs, Khaki and Stella, have the same mom and birthday.

Theme: “Elle Woods”
She chose to run as this “Legally Blonde” star because she said, “[Elle Woods] perfectly embodies a St. Mary’s girl.”
Reason for running: Fowler has been eager to run for a long time, as she has always looked up to the girls on Stuco.
Favorite part of the week: Handing out her stickers and notebooks because she loved greeting everyone.
Fun fact: Fowler has dislocated both of her knees.

Every single candidate worked insanely hard last week, and at 3:00 pm on Friday, April 8, the 2022-2023 Student Council members were announced.

Congratulations to everyone on a great week!​

All photos courtesy of Reeya Sharma (10) and Averie Howell (10)